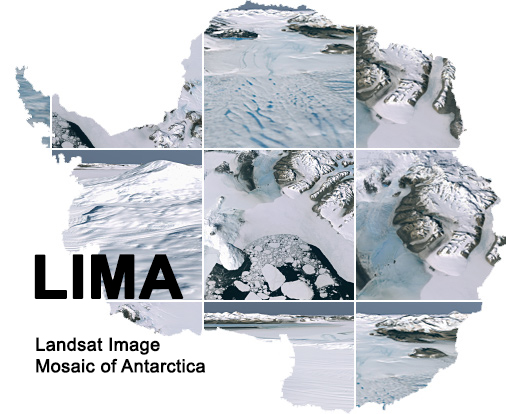 The Landsat Image Mosaic of Antarctica (LIMA) is the first-ever true-color high-resolution satellite view of the Antarctic continent, enabling you to see Antarctica as it would really appear if you were hovering above it.

LIMA was created from nearly 1100 individual Landsat-7 images of Antarctica, most collected between 1999 and 2003. A single Landsat image records the reflected brightness of a 185km x 185 km area of the earth’s surface in six spectral bands (30-meter spatial resolution), two thermal bands (60-meter resolution) and a panchromatic band (15-meter resolution). Three of the spectral bands correspond to red, blue and green regions of the visual spectrum allowing their combination to produce a true-color image. This natural-color combination of bands was used to create LIMA only after additional adjustments to the data were made to recover regions that were so bright they saturated the Landsat-7 sensor and to account for different elevations of the sun in each image. By employing the panchromatic band for additional spatial clarity, each image element (pixel) represents an area only 15 meters x 15 meters, about the size of half a basketball court. Details of the image processing used to create LIMA are described in the scientific publication “The Landsat Image Mosaic of Antarctica” available here (pdf, 993 KB).

Great care was taken to make all image adjustments so that the resulting pixel values represent actual surface reflectance, a property of the surface, independent of the solar illumination and of the state of the atmosphere. By achieving this goal to an extraordinarily high degree, images could be laid down without apparent boundaries between adjacent scenes and the scientific community was provided a data set of superb quality.

LIMA and this educational web site are projects of the International Polar Year. This site aims to familiarize people with Antarctica, to explore the richness of its features, to learn about why Antarctica matters to us all, and to explain and demonstrate how scientists use satellite imagery to study the continent.