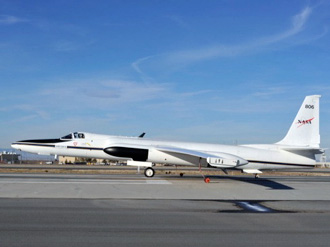 The Multiple Altimeter Beam Experimental Lidar (MABEL) team conducted a series of engineering flights from NASA's Dryden Aircraft Operations Facility (Palmdale, CA), on 22-24 Feb., in preparation for the instrument's month-long deployment in Greenland in April.
MABEL data will provide the foundation for future Ice Cloud and land Elevation Satellite-2 (ICESat-2) science. The instrument is tucked in the nosecone of an ER-2 aircraft, which also carries on its right wing a Cloud Physics Lidar (CPL), a device that measures cloud cover density. New to this deployment is the addition of a Digital Camera System placed behind the pilot. The camera will help researchers assess MABEL data in future deployments to the Arctic.

Pennsylvania Teacher to Fly with IceBridge 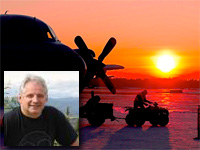 Tim Spuck, a high school teacher from Oil City, Penn., was selected through the National Science Foundation's PolarTREC program to work with IceBridge scientists and participate next April in survey flights during the 2012 Arctic campaign. He will be joined by two educators from Greenland and two from Denmark in Kangerlussuaq, Greenland. Spuck will write about his experience on the PolarTREC blog