Glaciologist Lora Koenig is leading an expedition to southeast Greenland in April to investigate an aquifer trapped within the ice sheet. The team, which includes lab member Ludovic Brucker, will drill several holes in the ice sheet to analyze snow density and structure. They will also leave instrumentation in the drilled holes to record temperatures over a year. 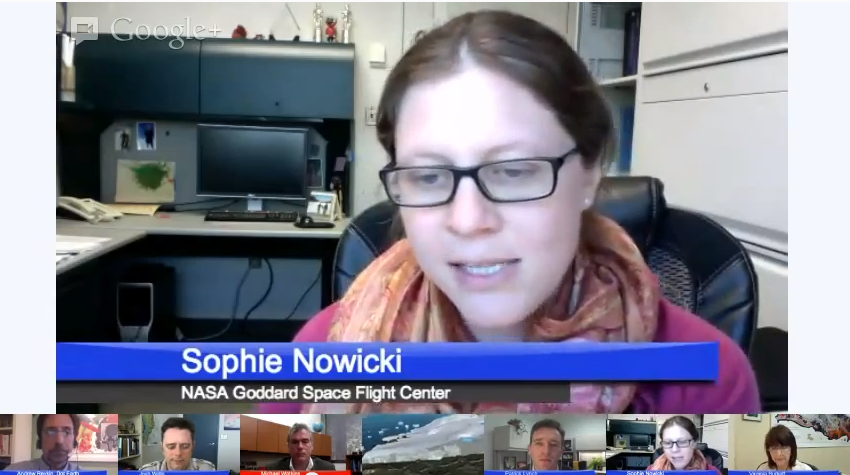 Ice sheet modeler Sophie Nowicki participated in a Google + Hangout on sea level rise with three other scientists from NASA’s Jet Propulsion Laboratory and the U.S. Geological Survey on April 2. The hour-long Hangout, which covered topics ranging from uncertainties in sea level rise modeling to potential impacts on coastal communities, was the kick-off event for NASA’s Earth Month celebrations.

Watch a recording of the Hangout on NASA Goddard’s YouTube Channel.

A NASA analysis led by Joey Comiso determined that the annual maximum Arctic sea ice extent was reached on Feb. 28 and it was the fifth lowest sea ice winter extent in the past 35 years. The new maximum —5.82 million square miles (15.09 million square kilometers)— is in line with a continuing trend in declining winter Arctic sea ice extent: nine of the ten smallest recorded maximums have occurred during the last decade. The 2013 winter extent is 144,402 square miles (374,000 square kilometers) below the average annual maximum extent for the last three decades.

Read more about the 2013 Arctic sea ice maximum and watch an animation of sea ice in this web feature.

Lab members Claire Parkinson and Nathan Kurtz are profiled in NASA’s “Know Your Earth 3.0, Local Connections” campaign. Many of the participants of this educational project will be speaking about their work at NASA to schools, youth groups and other organizations in their hometowns.

Find out more about Parkinson’s and Kurtz’s work on the “Know your Earth” website.

Operation IceBridge, currently carrying its 2013 Arctic campaign, has a new Facebook page for their frequent updates and photos from the field.