Earth possesses a strong magnetic field that is originated from the Earth’s fluid outer core (the intrinsic field). This field accounts for more than 95% of the magnetic energy of the observed geomagnetic field at the Earth’s surface. Its temporal and spatial variations hold some of the key knowledge of Earth’s deep interior properties, of interactions and responses between the fluid core and the solid Earth, and of the Earth system evolution history. Therefore, understanding, interpreting and predicting geomagnetic variability are among the most active Earth research areas, and are part of NASA’s Earth science strategic objectives. 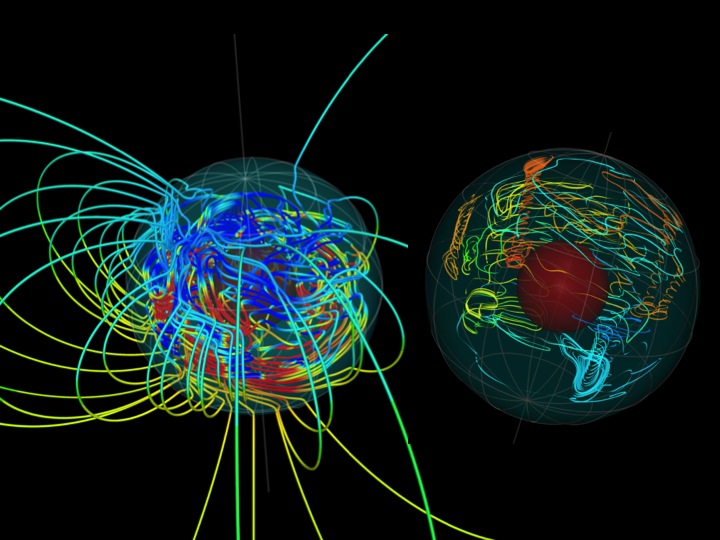 Figure 1. A snapshot of geodynamo simulation results. The left is the magnetic field lines through the outer core, and the right is the streamline of convective flow in the outer core.

It has long been conjectured that the Earth’s intrinsic magnetic field is generated and maintained by convective flow in the Earth’s fluid outer core (geodynamo). This convection is mainly driven by gravitational energy from secular cooling and differentiation of the Earth.

In the Geodesy and Geophysics Laboratory (Code 61A, NASA GSFC), we have developed and use an advanced numerical model (named “MoSST”: “Modular Scalable Self-consistent and Three-dimensional”) to understand the dynamical processes of the Earth’s core and the geodynamo (see Figure 1). This model is also used to study interactions between the fluid outer core and the solid earth through various coupling mechanisms, and their implications to changes of the Earth’s rotation rate (length-of-day) and of the Earth’s rotation axis orientations (called “polar motion” if defined in the terrestrial reference frames); and is used for studying planetary dynamos.

Figure 2: 20-year geomagnetic forecasts from MoSST_DAS. The movie shows the predicted non-dipolar radial magnetic field from 1600 to 2000, with a 20-year analysis cycle.

Independently, we also develop and use an ensemble based geomagnetic data assimilation system (named “MoSST_DAS”) to predict geomagnetic secular variation that can be observed by surface observatories and LEO satellites, and to improve estimations of the core dynamic state with the surface magnetic measurements (see Figure 2). In addition to enabling new capabilities for fundamental geomagnetic research, MoSST_DAS is also a powerful tool to provide predictive field models for other science communities and for industrial and societal applications.