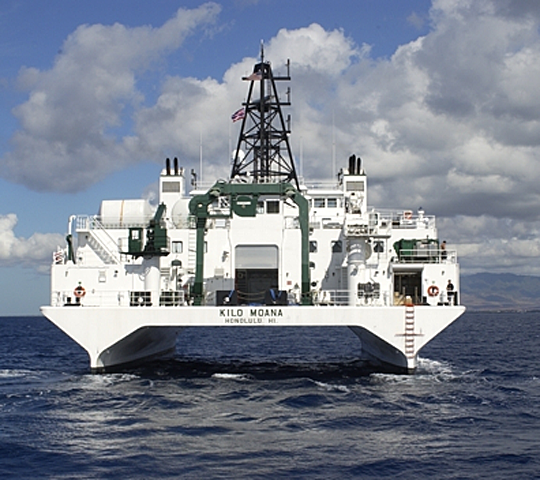 The Ocean Ecology Laboratory Field Program Support Group (FPSG; code 616) was recently invited to participate in a cruise of opportunity aboard the R/V Kilo Moana, a 186 foot, dual-hulled research vessel operated by the University of Hawaii for the National Science Foundation and stationed in Honolulu, Hawaii. The cruise was funded by the Office of Naval Research in support of the Multiple University Research Initiative (MURI) project entitled 'Dynamic Camouflage in Benthic and Pelagic Cephalopods: An Interdisciplinary Approach to Crypsis Based on Color, Reflection, and Bioluminescence.' SSAI’s Scott Freeman and Aimee Neeley represented the OEL on the cruise. 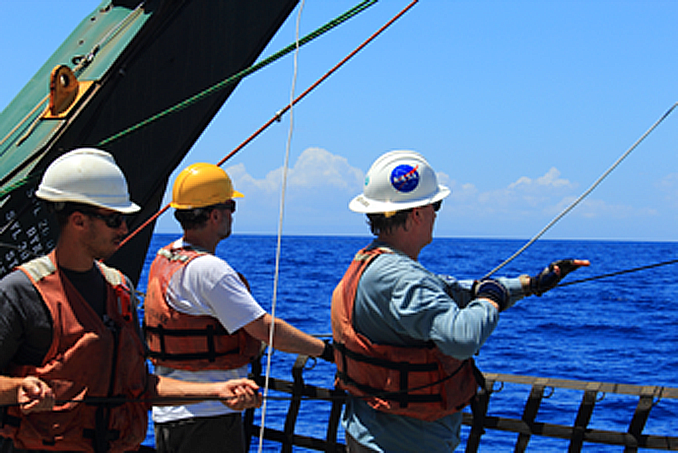 The ship left port early on May 30, 2012, with work commencing in the afternoon with a CTD roette cast to 1000 meters to collect water for keeping animals alive. The first and last stations were located west of the island of Lanai, with all other stations located west of the island of Hawaii. The ship arrived back in port on June 9, 2012. Nine stations were completed with both radiometry and water collection (See Map 1).

For oceanographic sampling, the Kilo Moana was equipped with a SeaBird 9/11 Plus CTD (conductivity, temperature, depth) instrument with recording system as well as a chlorophyll fluorescence meter, two beam attenuation meters (470 and 650 nm), and two oxygen sensors (SBE 43). These were attached to a 24-bottle (9 liters each) rosette for the purpose of collecting water at pre-defined depths. The operations of in-water optics and CTD deployments were coordinated by both the NASA FPSG and a group from Scripps Institution of Oceanography (SIO) led by Rick Reynolds. 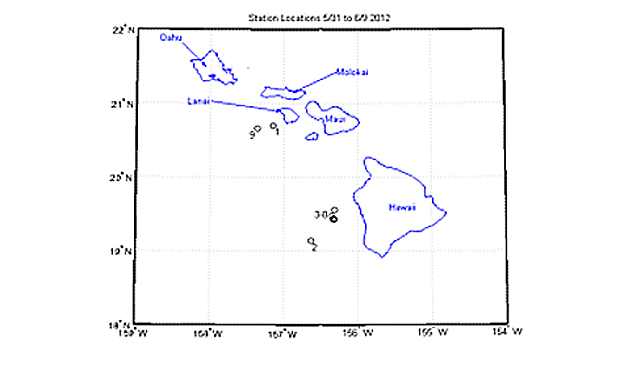 For in-water optics, staff measured the absorption, attenuation, and backscattering of particles in the water.  The FPSG IOP package consists of two Wetlabs ac-s instruments (one equipped with a 0.2mm filter) and one bb9. The ac-s measures absorption and attenuation (and total scattering by difference) at ~ 80 wavelengths between 400 and 740 nm, while the bb9 measures backscatter at 9 wavelengths and 117°. The IOP package reached up to 150m in depth. Both downwelling irradiance (Ed) and upwelling radiance (Lu) were also measured using three different sets of radiometers, and incoming solar irradiance (Es) with two separate radiometers. The Satlantic profilers (Hyperpro or OCR) and Biospherical C-Ops profiler reached to 250m and 85m, respectively.  A multi-cast method was used for deploying the radiometers. For each station, one deep cast and two 25m casts were made (See Table 2). Profiles were made in conjunction with Rick Reynolds (SIO), who also brought a Hyperpro profiler and an IOP package consisting of two Hydroscat-6s, a LISST-100X, and a LISST-Holo.

In collaboration with researchers from SIO and Duke University, staff measured horizontal radiance at several solar zenith angles, from midday to sunrise/sunset. One radiometer was held pointed toward the sun, while the other was 180° away from it during profiles. These data will be used by other participants in the cruise to model the light field available to fish and cephalopods at depths up to 200m. 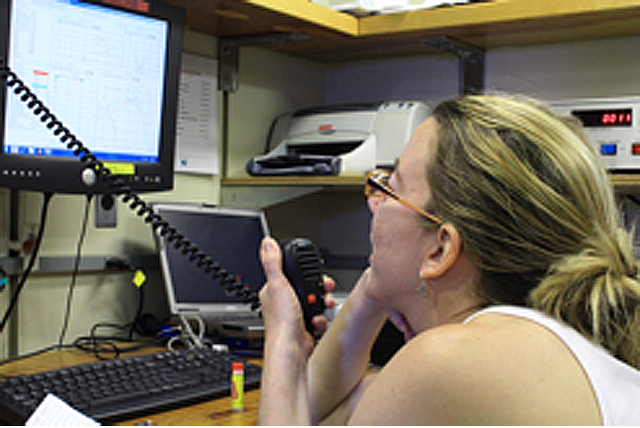 Aimee Neeley communicates with the bridge and the winch operator during a CTD cast.

The NASA FPSG is responsible for processing and distributing the CTD profile data, as well as processing and submitting our own biogeochemical and in-water optical data to SeaBASS. Further work will be conducted to establish a QA/QC protocol for data processing that will be accepted and ultimately used by the bio-optical community. The purpose of an established QA/QC protocol is to ensure the quality and accuracy of the data that are archived in NASA’s SeaBASS database, and are ultimately used not only by other investigators in the community but also by the NASA Ocean Biology Processing Group for performing satellite matchups and algorithm development. To this end, accurate data are imperative. Moreover, the simultaneous deployment of multiple instruments and the collection of both in-water optics and biogeochemical parameters by two independent groups will provide a valuable tool for conducting closure experiments and the development of uncertainty budgets for our measurements.