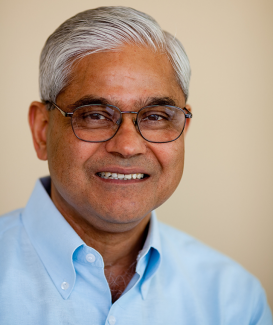 Dr. Shukla is a Distinguished University Professor and the Founding Chairman of the Department of Atmospheric, Oceanic and Earth Sciences at George Mason University (GMU), Virginia, USA.

He is a Fellow of the American Geophysical Union, the American Meteorology Society, India Meteorology Society, and an Associate Fellow of TWAS (the academy of sciences for the developing world). He has been the Ph. D. thesis adviser for about 20 students at MIT., Univ. of Maryland, and George Mason University. Professor Shukla has exerted a tremendous influence on the field through his publication of over 200 scientific papers, reports and book chapters, his direction of 20 Ph.D. students’ dissertation research, his leadership of several national and international advisory and planning panels.

Professor Shukla has contributed to the science of meteorology and to governments, research organizations, and institutions of higher learning throughout the world, through fundamental scientific advances, institution building, and international cooperation in meteorology for the betterment of humankind worldwide.

He has made fundamental contributions to the study of climate dynamics that have led to the development of a scientific basis for the prediction of climate beyond the limit of the predictability of daily weather, which derives from the influence of the slow variations of the atmosphere’s lower boundary conditions. This pioneering work helped lay the scientific foundation for dynamical seasonal prediction at a time when the community was quite skeptical about its prospects. This idea launched a large community research effort to investigate the effects of boundary conditions on climate variability and predictability, and it lead to routine dynamical seasonal prediction. Beyond that, Professor Shukla has helped launch global programs to measure, quantify, and exploit the Earth's climate variability and predictability. He has helped establish institutions in India, Brazil, South Korea and Italy for the purposes of studying the predictability of seasonal to interannual climate fluctuations as well as for making actual climate predictions.

Professor Shukla has also contributed greatly to establishing the importance of land surface processes in determining the seasonal and longer predictability of climate. Toward that end, he established the Center for Ocean-Land-Atmosphere Studies (COLA) to conduct basic research on climate predictability with the idea that air-sea and air-land interactions are both important. The COLA group is now recognized as one of the outstanding research centers in the world focused on climate dynamics and climate predictability. Professor Shukla and colleagues at COLA have conducted several studies of global deforestation, desertification and monsoons as examples of phenomena in which interactions between the atmosphere and the land surface play a critical role. This emphasis on land surface processes was a fundamental advance of the science, which has lead to numerous research programs, field experiments and space- missions.

Another major contribution made by Professor Shukla was his development and proof of the concept of retrospective analysis of atmospheric observations. As in the case of dynamical seasonal prediction, he had the foresight and the vision to push forward this idea and conduct a pilot reanalysis as proof of concept at a time when the community was somewhat skeptical about its feasibility. Reanalysis efforts in the U.S., Europe and Japan inspired by Professor Shukla’s work have led to invaluable data sets that form the basis for climate analysis research today and for the foreseeable future worldwide.

Professor Shukla's contributions represent a unique combination of major scientific accomplishments and substantive community service including the development of scientific programs, creation of new institutions, and fostering of further international cooperation in weather and climate research, to ensure that the fruits of scientific research are harvested for the benefit of society. He has also established Gandhi College in the village of his birth for the education of rural girls.