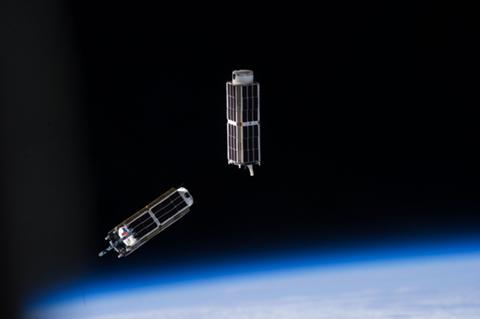 IceCube is a 3U CubeSat funded by NASA for spaceflight demonstration of a commercial 883-GHz cloud radiometer. See this book chapter. IceCube Level 1 dataset is available for download here. The satellite has produced the first global atmospheric ice map at the 883-Gigahertz band, an important frequency in the submillimeter wavelength for studying cloud ice and its effect on Earth’s climate. The IceCube team is a winner of Robert H Goddard Exceptional Achievement Award for Engineering in 2019. 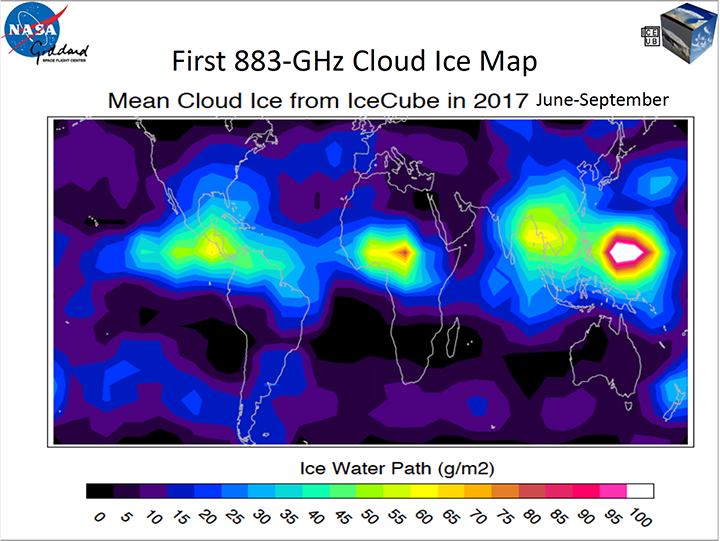 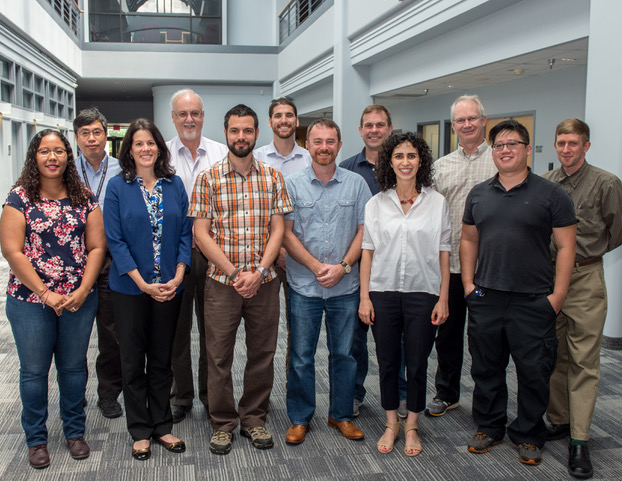 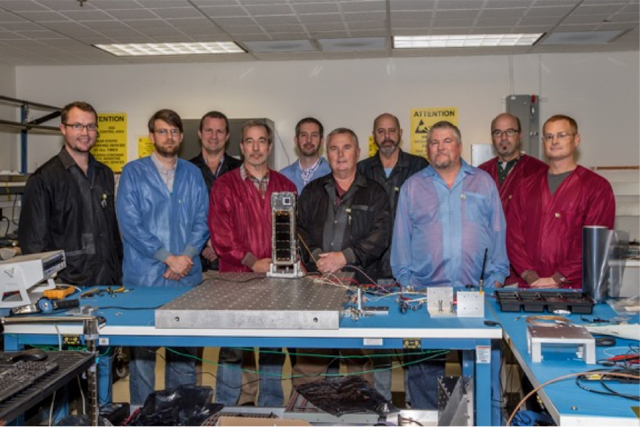 IceCube was successfully deployed from the ISS on May 16, 2016. It was contacted on its first pass over WFF about 73 minutes after the deployment. IceCube is operating and it was verified that both the solar arrays and antennas deployed and the battery is fully charged. It also appears that the ACS system is operating nominally.

Clouds play an important role in Earth’s climate system through interactions with atmospheric radiation, dynamics, and precipitation processes. Global cloud ice and properties are critical for quantifying cloud’s roles, but it is challenging to measure these variables accurately. Submillimeter (submm) wave remote sensing has great capability of penetrating clouds and measuring ice mass and microphysical properties. The IceCube project, funded by NASA’s Science Mission Directorate (SMD) and Earth Science Technology Office (ESTO), is spaceflight demonstration of 883-GHz cloud radiometer on a 3U CubeSat. The 883-GHz frequency is a spectral window whereby the radiation is highly sensitive to ice cloud scattering and interacts in depth with volume ice mass inside the cloud. Built upon NASA’s ER-2 aircraft instrument, the Compact Scanning Submm-wave Imaging Radiometer (CoSSIR), the IceCube seeks to raise the technology readiness level (TRL) of 883-GHz radiometer for future spaceflight mission. To be launched in March 2017, IceCube is a collaborative endeavor between NASA’s Goddard Space Flight Center (GSFC) and Virginia Diode Inc. (VDI).

IceCube will be launched to the International Space Station (ISS) and subsequently released from ISS for nominal operation of 28+ days. The CubeSat will deploy the stowed solar panels on the long-side of the bus, and acquire the Sun shortly after released from ISS. The 883-GHz radiometer power will be cycled off during eclipse and on in daylight. The spacecraft is configured to spin continuously around the axis to the Sun at ~1.2 degrees per second. This spin allows the maximum solar power reception and periodic Earth and space views for instrument calibration. From the extended deep space and clear-sky nadir views, which are not available on the ground because of atmospheric opacity, the IceCube 883-GHz receiver will be validated against these stable references for its radiometric stability and accuracy.

Although IceCube is a technology demonstration experiment, it will acquire the first global 883 GHz cloud map from the cloud-induced radiance. These measurements will be used to assess ice cloud scattering strength and variability at this frequency for future cloud missions. A successful IceCube mission will also accelerate scientific exploration through efficient and frequent access to space with the CubeSat approach.

IceCube solar panel deployment was tested rigorously in laboratory as well as in a thermal vacuum chamber at NASA’s Wallops Flight Facility.