Figure 1 shows the Antarctic drainage divides developed by the Goddard Ice Altimetry Group from ICESat data. Our definitions of the West Antarctic ice sheet (systems 18-23 and 1), the East Antarctic ice sheet (systems 2-17), and the Antarctic Peninsula (systems 24-27) allocate the drainage systems according to ice provenance with separation of East and West Antarctica approximately along the Transantarctic Mountains. The parts of the Ronne and Filchner ice shelves in systems 2 and 3, and the western part of the Ross Ice Shelf in system 17, are implicitly allocated to East Antarctica. The drainage systems include all basins and sub-basins in each, and due to sporadic ice shelf advance and break-back, are drawn to prominent points on the coastline (e.g., between systems 8 and 9), not to specific junction points of coastline, ice front, or grounding line; users should make adjustments to the area and other statistics that would be affected if different junction points are selected. 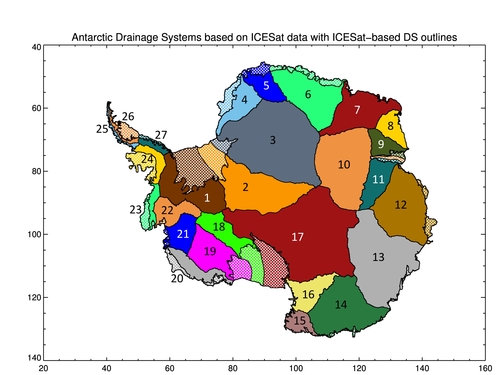 From the Antarctic drainage system boundaries, we generated two 1-km polar-stereographic grids: a grid giving the drainage system for each cell, and a grid giving the surface type (continental, floating, or island/ice rise). By continental, we mean the region inside the MODIS grounding line; within this region we have no way to distinguish between ice-covered surfaces and other surfaces. Islands and ice rises are defined by the MODIS island polygons; the surfaces may or may not be ice-covered. Floating ice is the rest of the area between the MODIS grounding line and our modified MODIS coastline; it includes both glacier tongues and ice shelves. The final grids give the surface specification (continent, ice shelf, or island/ice rise), and the drainage system (1-27) for each 1 km grid cell. Figure 2 is a map of the surface types (the 1 km point-by-point drainage system map is indistinguishable from Figure 1). 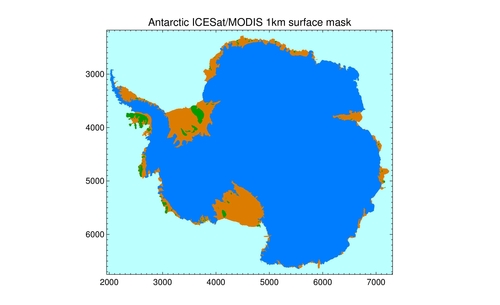 For Antarctica, we also have images of the drainage divides overlaid on Mosaic of Antarctica maps (Haran et al., 2005) and on an ice velocity map (Rignot et al., 2011) available for download.

Figure 3 shows the Greenland drainage divides developed by the Goddard Ice Altimetry Group from ICESat data. We do not provide a Greenland surface type mask because it is available at source (Ekholm, 1996). 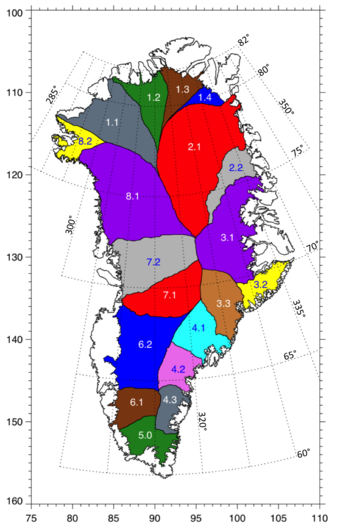 Figure 3. Greenland drainage divides. The axes are labeled with our 50-km polar-stereographic grid coordinates. The numbers on Greenland are the drainage subsystem IDs.

Use the following reference for this page or the data accessed from this page:

Ice sheet drainage systems were delineated to identify regions broadly homogeneous regarding surface slope orientation relative to atmospheric advection, and additionally in the case of Antarctica, denoting the ice sheet areas feeding large ice shelves. Systems and sub-systems include one or more primary basins, each identifiable with a particular outlet glacier or ice stream that drains the interior of an ice sheet, plus secondary basins that complete the periphery of an ice sheet and are normally ignored in net mass budget estimates based on input-minus-output methods. The drainage system schemes for Antarctica and Greenland cover the entire area within the coterminous coastline.

Drainage system divides developed by the Ice Altimetry Group at Goddard Space Flight Center for Antarctica in 2001 were based on ERS altimetry denoting ice provenance from either East Antarctica or West Antarctica (Zwally, et al., 2002). See Figure 4 for a comparison of the ICESat-based drainage divides to the ERS-based drainage divides. The divides shown in Figure 1 are based on the 500 m DEM of Antarctica (Figure 5) developed from ICESat/GLAS first seven GLAS campaigns (Table 1) (Zwally et al., 2002; DiMarzio et al., 2007a), supplemented by topographic information in the area south of 86° S from several sources (e.g., Liu et al., 2001; Jezek et al., 2002). 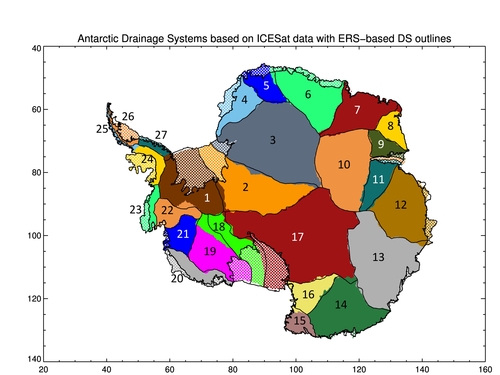 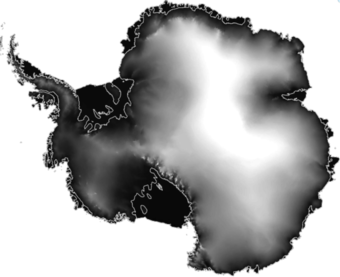 Vector maps (Figure 6) showing the downslope maximum-gradient direction were generated from the DEM, and drainage system divides were then drawn on these maps, primary divides along major ridges, and secondary divides starting at points of interest on the coastline (e.g., between systems 6 and 7) or grounding zone (e.g., between systems 18 and 19), drawn upslope until meeting a primary divide or another secondary divide. The divides were continued on the ice shelves based on a combination of surface elevation, shear crevasses, rumples and dolines orientation, as well as ice-front lobe splits. A number of other sources, such as the Landsat Image Mosaic of Antarctica (Bindschadler et al., 2008, 2011a,b) and the MODIS Mosaic of Antarctica (Haran et al., 2005), were used to help refine the drainage divides on some of the ice shelves. 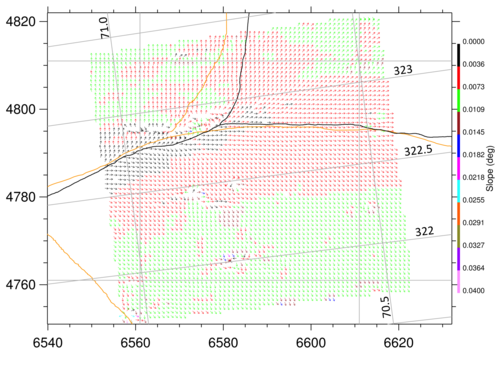 Drainage divides were digitized using ArcGIS v 9.3. For the majority of the divides, the digitization was done from paper maps of the slope vectors (Figure 6) via an Altek Datatab Pro Line puck digitizer. However, in regions where the slope vectors did not yield useful information, imagery from the RADARSAT Antarctic Mapping Project (RAMP; Jezek et al., 2002), Modis Mosaic of Antarctica (MOA; Haran et al., 2005), and the Landsat Image Mosaic of Antarctica (LIMA; Bindschadler et al., 2008, 2011a, b), was used as a guide. These images were viewed in ArcGIS with the divides and other relevant layers such as contours, rock outcrops, etc. Divides were then edited on screen using all available data as a guide. This method was used in parts of the Antarctic Peninsula, and the Filchner/Ronne and Ross ice shelves.

Divides were drawn to the MOA coastline (Haran et al., 2005). This coastline was edited to remove minor errors such as dangling nodes, improper loops, etc. This was done so that the divides could be converted to polygons, which requires the points to be ordered consecutively. Once this was done, polygons extended to the coast were created via a third party GIS application called Xtools. The grounded versions of the polygons were generated by masking the coastline polygons with the MOA grounding line (Haran et al., 2005), using the clipping function in ArcGIS. The resulting drainage system divides are shown in Figure 1.

Table 3 gives some statistics related to the divide boundaries.

The MODIS grounding line is not the latest or the best available grounding line for Antarctica. It would be better to use the ASAID grounding line (Bindschadler et al., 2008, 2011a, b), but there are too many inconsistencies between that line and the MODIS coastline.

Some islands are not include in the MODIS island polygons. In particular, we note that Sherman Island in the Abbot Ice Shelf is not present.

The ICESat DEM used to determine the locations of the drainage divides was made with only the first 2 years of ICESat data, and an early release of the data was used. 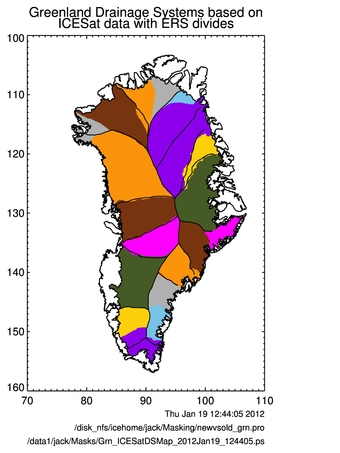 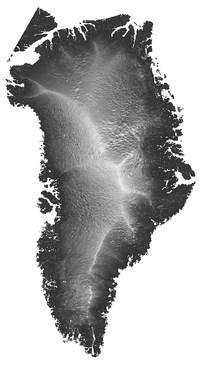 The DEM, shown in Figure 8, used data from the first seven GLAS campaigns (Table 1). Vector maps (Figure 6) showing the downslope maximum-gradient direction were generated from this DEM (Table 2). Drainage system divides were drawn on these maps, primary divides along major ridges, and secondary divides starting at points of interest either on the coastline or along the ice terminus, drawn upslope until meeting a primary divide or another secondary divide. The drainage systems and sub-systems include all basins and sub-basins in each; users should make adjustments to the size of the area and other statistics that would be affected if different starting points are selected to meet the need of particular projects.

Drainage divides were digitized using ArcGIS v 9.3. The digitization was done from paper maps of the slope vectors (Figure 6) via an Altek Datatab Pro Line puck digitizer. The ice sheet boundary included in the drainage system divides was defined based on Ekholm's (1996) surface type map with an IDL™ routine (find_boundary.pro) developed by David Fanning (http://www.idlcoyote.com) that uses the chain-code algorithm; the boundary was then edited to remove anomalies. The polygons extended to the line were generated via a third party GIS application called Xtools. The resulting drainage system divides are shown in Figure 3. Table 4 gives some statistics related to the divide boundaries.

The ICESat DEM used to determine the locations of the drainage divides was made with only the first 2 years of ICESat data, and an early release of the data was used.

When more and/or different data are processed, it might be possible to draw a divide in the western and northern area of sub-system 2.1 to isolate a well known ice stream basin, and a divide separating a smaller eastern region from the rest in system 5.