This update resolved a subtle bug in the code due to IDL not preserving index order when sorting identical numbers. The averages and trends did not change significantly. The version number is now 731.

This update adds melt maps for 2017. Added NetCDF versions of the datafiles and a python routine to read them. Updated README.

This update adds melt maps for 2015 and 2016. 2016 uses F17 for the first part of the year and then switches to F18. The intercalibration between F17 and F18 looks good so at the moment no bias adjustment is done. We will continue to monitor the performance of F18.

Fixed a bug that didn't reinitialize the default freeze value between pixels which meant that in a low number of pixels there was no new freeze value determined and the algorithm used the prior result. This fix made the version 730s across all sensors.

In early October 2011, the AMSR-E instrument developed a fault and further data was unavailable on the archive. The previous source data for this routine, SSM/I F13, stopped providing data at the end of 2007 and at that time the routine had been adapted to AMSR-E and maps were processed from 2003 through 2010. The routine has now been adapted to use SSM/IS F17 as a data source for microwave brightness temperatures with the version “701s”, and the 2011 maps were processed.

In February 2014, we investigated anomalous behavior of the routine in coastal areas on the early freeze and freeze maps. We discovered that the bias correction used for F17 was misreporting ice concentration values during the melt period, and that was resulting in the poor freeze-up values. The bias was adjusted and the datset was reprocessed for 2007 on with version "702s". 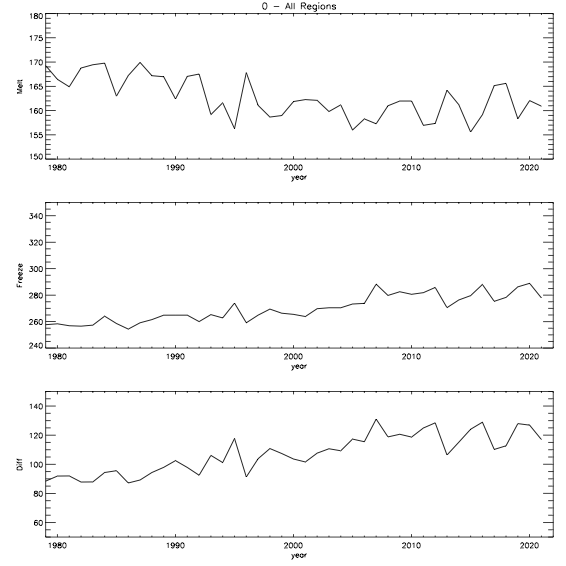 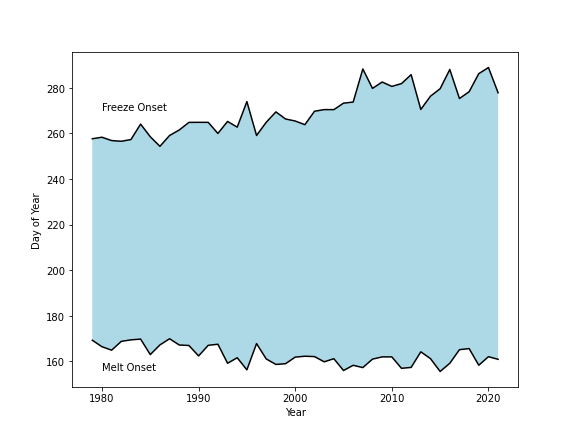 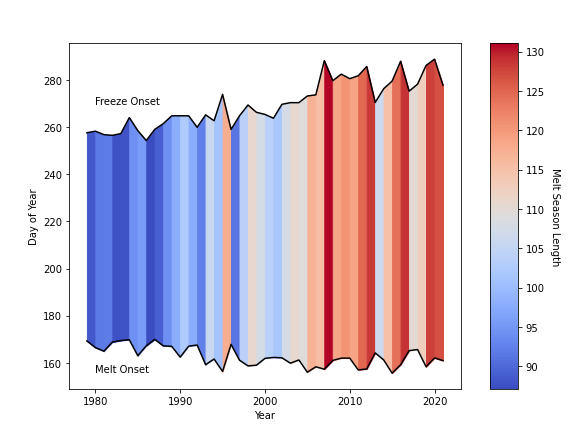 Integer arrays, 304 x 448, big endian (windows and mac will need to byteswap). Values are the day of year where the event described in the filename occurs (in 'melt', a value of 175 means melt conditions are present on June 24 in a non-leap year).

There is a sample routine on our site called ncdftest.py that reads and plots the data.

All negative values represent pixels where melt or freeze could not be determined; the different negative values correspond to different criteria in the algorithm and should not be considered for analysis. The earliest melt possible due to the algorithm is day 75. Data is no longer masked for the polar "hole" in the coverage, and users should note that the hole changes size with satellite transitions.

These are text tables that give the average value per year (rows) of the named product per region. There has been some quality control on the pixels included in the averages. The first row gives the column labels, which are:

Removed the AMSR-E products from this distribution in favor of SSM/I / SMMR trend only, since AMSR-E stopped providing data. Updated 2007+ to improved bias adjustment, version 702s.

Updated through 2016. Version changed to 730s across all the instruments as a bug in the default ice freeze value for some cases was corrected.