The circulation of the atmosphere is affected by the horizontal, vertical, and temporal distribution of atmospheric constituents such as water vapor, aerosols, clouds, precipitation, and latent heat released by cloud formation. Improving our ability to predict weather and climate depends upon accurate representation of these constituents in the vertical dimension. However, the depth and turbulence of the atmosphere make observing gases and microscopic particles in the vertical dimension, i.e., profiling, particularly challenging. Scientists conceive, design, develop, and implement ultraviolet, infrared, optical, radar, laser, and lidar technology for profiling the atmosphere. These instruments are deployed both in field experiments and in regular operations for weather forecasting. They use the observations from these instruments to construct profiles of winds, water vapor, aerosols, and precipitation for applications that include satellite sensor calibration and Earth system model development and validation.

Physical Retrievals of Rainrate and Structure

Estimates of surface rain fluxes and precipitation vertical structure from satellite sensors can be used to characterize storm structure and intensity, and to indirectly infer distributions of vertical air motion and latent heat of condensation in precipitation systems.  Therefore, in aggregate, these data are also important for global hydrological and energy cycle studies.  The most accurate satellite estimates of precipitation rates and vertical structure are currently derived from a combination of spaceborne weather radar and passive microwave radiometer observations.  The spaceborne radar data reveal the structure of precipitation at relative high spatial resolution, while the microwave radiometer observations provide a measure of the vertical column-integrated water content of the atmosphere due to water vapor, clouds, and precipitation.  Since these atmospheric constituents attenuate the spaceborne radar pulses that are reflected by precipitation, the passive microwave measurements can be used to help "attenuation-correct" the radar observations.  The greater relative accuracy of combined radar-radiometer estimates of precipitation makes them useful not only for direct science applications, but also for calibrating other satellite sensors that have lower accuracy but provide greater sampling in space and time; see Global Precipitation Estimates tab.

Shown in the figure at right is a schematic of the Global Precipitation Measurement (GPM) mission Core satellite, including the scanning of its Dual-frequency Precipitation Radar (DPR) and GPM Microwave Imager (GMI).  The GPM Core mission is slated for launch in 2014.  The DPR and GMI represent the next-generation of sensors that are currently flown on the Tropical Rainfall Measuring Mission (TRMM) satellite (1997 - present).  The DPR's two channels generally yield more accurate precipitation particle size distribution and rain rate estimates.  The GMI has additional higher-frequency microwave channels useful for light rain and snow detection.

Laboratory researchers are developing computer algorithms for diagnosing precipitation rates, vertical structure, and latent heating from a combination of the DPR and GMI data; see Grecu et al. (2004, 2009, 2011).     In the pre-launch phase of GPM, these algorithms are applied to either TRMM data or synthesized GPM observations. Below are the surface rainfall rate fields in Hurricane Floyd (1999) and a Pacific wintertime cold-frontal band derived from TRMM data and a prototype algorithm being designed for GPM.  The performance of this algorithm is similar to previously-developed TRMM algorithms, but it has the advantage that it can incorporate the additional channel data from GPM to improve precipitation estimates. 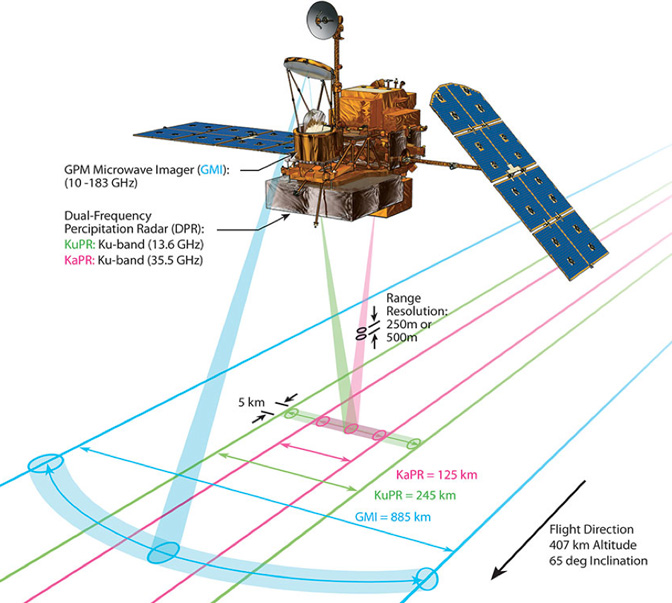 GLOW stands for Goddard Lidar Observatory for Wind. It is a mobile Doppler lidar system based on double edge direct detection technology. It consists of a molecular system at 355nm and a aerosol system at 1064nm. GLOW merges atmospheric science with innovative new remote sensing methodologies. New lidar technologies are perfected during ground use in preparation for eventual use in air and space based wind measurement systems.

The TWiLiTE (Tropospheric Wind Lidar Technology Experiment) airborne Doppler lidar was developed as an ESTO funded IIP instrument over the three year time period beginning in August 2005. The TWiLiTE instrument is designed for autonomous operation on NASAs high altitude research aircraft, such as the ER-2, WB-57 or Global Hawk. Flight testing and validation of TWiLiTE is a critical step forward for direct detection Doppler lidar on the path to a space based global 3DWinds Mission. 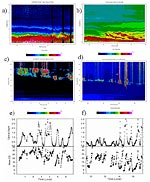