The seventh and final cruise for the project entitled "Impacts of Climate Variability on Primary Production and Carbon Distributions in the Middle Atlantic Bight and Gulf of Maine" (CLiVEC) was carried out on board the R/V Henry Bigelow from August 7-24, 2012. CLiVEC is a joint research project with researchers from Old Dominion University (ODU) and the National Oceanographic and Atmospheric Administration (NOAA). The overall objective of the project is to study the effects of inter-annual and decadal climate variability on primary production and carbon distributions using the results from these extensive field measurements as well as the satellite records available from the region.

The Bigelow is a single-hulled research vessel that is 209 feet long (63.8m) and has a breadth of 49.2 ft (15m). It is stationed at the Newport naval base in Rhode Island and operated by NOAA. All previous CLiVEC cruises were carried out on the NOAA R/V Delaware II; however, this vessel has been decommissioned and was no longer available. 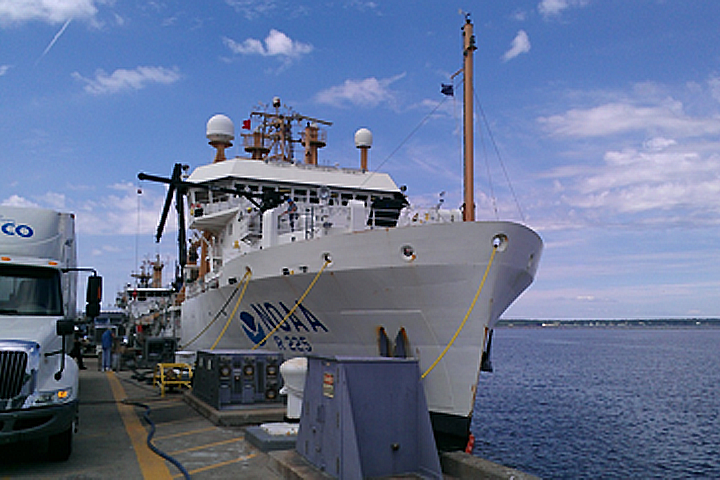 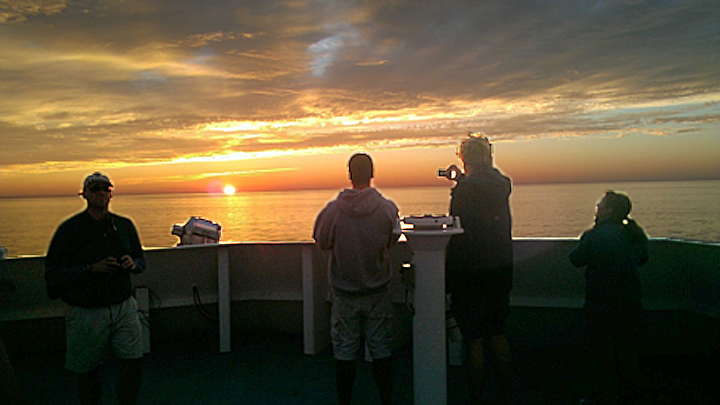 Sunset observed from the flying bridge of the Bigelow

All of the CLiVEC field sampling was done on cruises of opportunity made possible by NOAA through the Ecosystems Monitoring Program (EcoMon). EcoMon is an extension of the Marine Resources Monitoring Assessment and Prediction (MARMAP) project begun in 1978 to monitor the health of the fisheries in the northeast US continental margin. On all previous CLiVEC cruises, surface biogeochemical discrete samples were collected from the ship’s flow-through sea water system as well as at multiple depths collected from Niskin bottles deployed on a CTD (conductivity, temperature, depth) rosette package maintained by NOAA. Fluorometric dissolved organic matter (FDOM) and beam transmission data were also measured continuously by plumbing instruments into the ships flow through system. 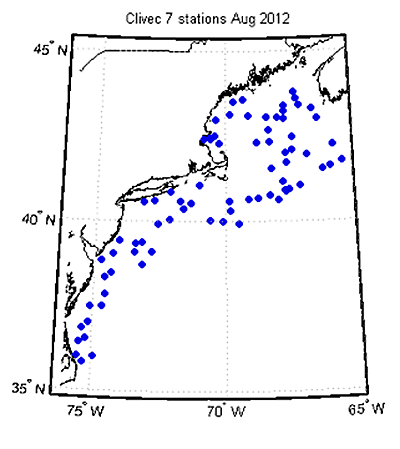 For this final cruise, three Ocean Ecology Laboratory personnel (Scott Freeman, Mike Novak, and Dirk Aurin) participated in order to deploy and compare two free-fall profiling optical radiometers manufactured by different companies to measure Apparent Optical Properties (AOP). An Inherent Optical Properties (IOP) package was also mounted on the CTD rosette and deployed at depths up to 150 meters. In addition, a barrel equipped with a CTD, a WET Labs ac-s, and an FDOM fluorometer was plumbed into the ships flow-through system to make continuous measurements. The instruments were plumbed in-line to avoid any lag time from the resident time of the water in the barrel. More detailed descriptions of these instruments are provided later in this report. 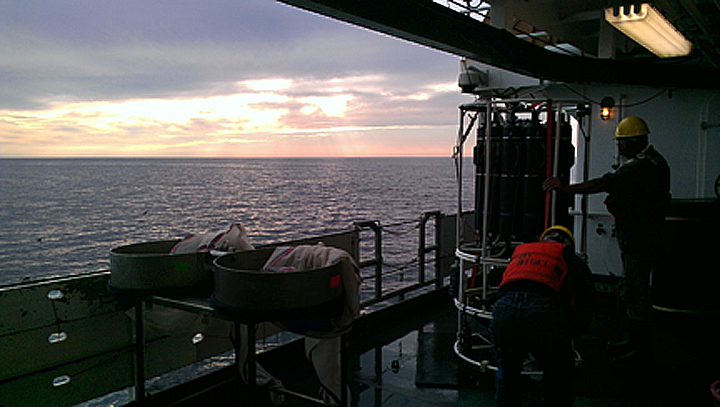 Bigelow Crew Prepares the Rosette for the Sunset Station

Staff sampled 53 rosette stations and 26 flow-through stations during the sixteen working days at sea. On average, three CTD rosette stations and two flow-through stations were sampled each day. AOP profiles were conducted before or after the CTD cast when there were no light or weather limitations. A fourth CTD cast was sampled on days with clear skies at times near satellite overpasses when time permitted it. (See Table 1 for an extensive list of discrete and instrumental measurements made at stations). 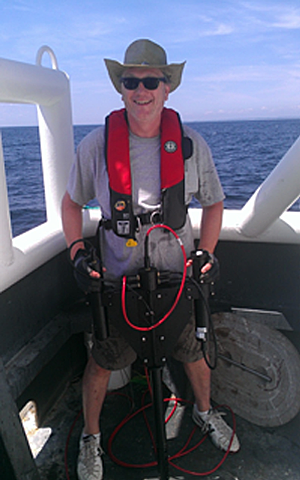 For oceanographic sampling, the R/V Bigelow was equipped with a SeaBird 9/11 Plus CTD instrument with recording system as well as a chlorophyll fluorescence meter, and an oxygen sensor (SBE 43). These were attached to a 12-bottle (10 liters each) rosette for the purpose of collecting water at pre-defined depths. The ship has a clean seawater flow through system equipped with a thermosalinograph (TSG) and pCO2 gas analyzer. A line from the system was plumbed directly into our flow-through instruments mounted on a rack inside the barrel. The barrel was filled with the exhaust water from the instruments to keep them at ambient temperature to avoid any fogging issues.

The following biogeochemical parameters were collected at every station (Table 1):

Samples for each parameter were collected from the CTD rosette at the surface (~3-4m), the chlorophyll maximum, and just below the thermocline. In addition, water was collected near the bottom at stations that were deeper than 90 meters for CDOM, DOC, and POC. 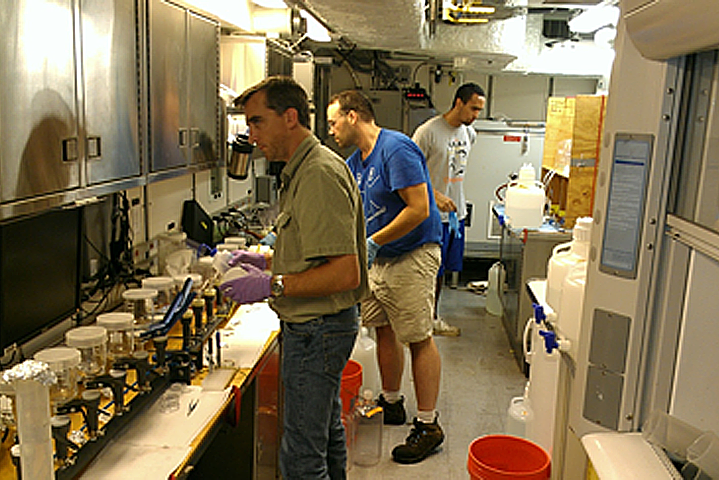 For in-water optics, staff measured the absorption, attenuation, and backscattering of particles in the water. The IOP package installed on the CTD rosette consisted of a WET Labs ac-s, dh-4, and bb-9. The ac-s measures absorption and attenuation (and total scattering by difference) at ~ 80 wavelengths between 400 and 740 nm, while the bb-9 measures backscatter at 9 wavelengths and 117°. The dh-4 provides power and stores data collected by the other instruments. Downwelling irradiance (Ed) was measured using a Satlantic OCR-7 radiometer mounted to the top of the rosette package, and a Seabird 49 provided pressure, temperature, and conductivity measurements. The system was battery-powered, with files offloaded between casts. Because of the depth limitations of the battery pack (150 m), there were two stations where IOP data was not collected.

Two hand-deployed radiometer packages were also employed. The Satlantic HyperPro system measures Es (surface downwelling irradiance; separate instrument from the profiler), Ed, and Lu(upwelling radiance) at ~135 wavelengths between 350 and 800 nm. The Biospherical C-OPS measures the same parameters at 19 wavelengths between 300 and 900 nm. From these measurements, water leaving radiance (Lw) and remote-sensing reflectance (RRS) can be calculated. A multi-cast method was used for deploying the radiometers. At most stations, one deep cast and two 10m casts were made. Time constraints prevented the staff from using both sets of radiometers each day, as had been planned. However, near the end of the cruise both were used for four stations. At other stations, the Satlantic HyperPro system was used, as it was easier to deploy quickly, and there were a few stations for which the weather conditions did not permit data collection. In total, 46 stations had HyperPro data collected, while five stations had C-OPS data collected.

Table 2 Station Information. The numbers in the last three columns are file names.