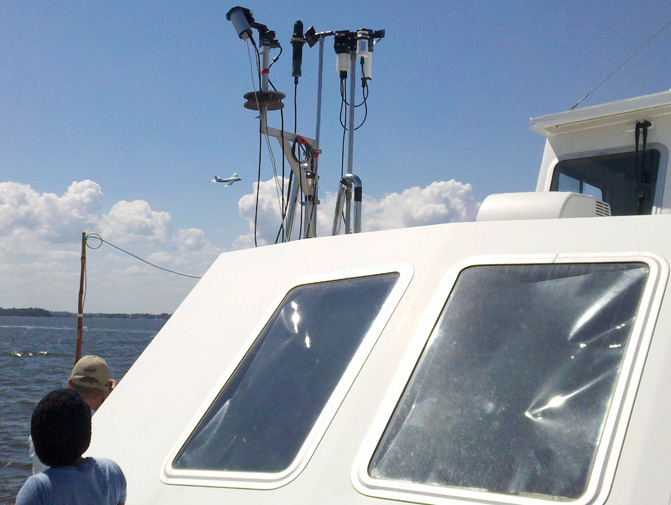 The NASA P3B airplane equipped with instrumentation to measure aerosol and trace gas concentrations can be seen conducting spirals over the NOAA SRVx ship.  Just to the right of the airplane are 3 sensors (1. Pandora for measuring atmospheric aerosol and trace gas constituents such as ozone and nitrogen dioxide, 2. a UV-Vis-NIR solar reference for an in-water profiling radiometer and 3. UV-Vis-NIR solar reference cluster with shadow band for an in-water profiling radiometer ; C-OPS).

Several atmospheric sensors were employed on the NOAA SRVx. A new modified Pandora sensor (using feedback from a digital camera to the sun-tracker) was used for continuous measurements of atmospheric trace gases (total column NO2, O3, SO2) from the boat (University of Maryland, GSFC). A set of analytical instruments continuously collected and monitored ozone, NO, and NOy levels within the marine boundary layer (University of Maryland). A micropulse lidar was installed on the evening of July 15th to conduct measurements of aerosols and clouds including aerosol and cloud layer heights (Sigma Space; completed image posted daily to the Disc AQ daily quicklook table under "MPLs", at:  https://www-air.larc.nasa.gov). Air samples were collected throughout each day for laboratory analysis of aerosols including water-soluble organics and inorganic ions as well as measurements of methane, CO2, and N2O (University of New Hampshire). One Microtops Ozonometer and two Microtops sunphotometers were used for measurements of total column ozone and aerosol optical thickness (AOT) in the spectral range of 340-936 nm (University of Maryland) (data will be made available through the AERONET/Marine Aerosol Network)

During four flight days of the DISCOVER AQ activity, the NOAA SRVx was positioned to sample in the upper bay (between Baltimore and south of Annapolis) to provide ground-truth data for DISCOVER AQ. These airplanes (UC-12 and P3B) conducted several passes over the ship location each day including some spiral flight tracks by the P3B directly over the ship. The observations collected by DISCOVER AQ will also be applied for ocean color analyses including the ACAM sensor (UV-Vis radiometer; GSFC) and the HSRL (LARC lidar). Russ Dickerson's team (UMCP) also flew their Cessna 402 B near the ship during our transit further south in the bay.

Other Labs or Offices
Ocean