THOR data is usually visualized in two ways. The two examples below are from the March 2002 THOR Validation Campaign that took place over Oklahoma.

The figure shows that the central channel observes intense direct backscatter from near the cloud top, while the outer channels observe a fainter halo formed by multiple scattering deep inside the cloud. The signal in the outer channels is delayed because photons need time to reach the halo’s outer portions, and it is stretched because some photons meander more, while others follow more straight paths. 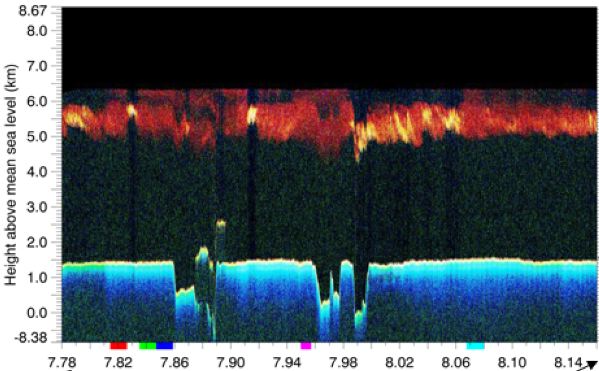 An RGB color composite image of THOR observations taken from a flight altitude of 8.5 km. Red is the direct backscatter photon count observed by THOR’s central channel (Channel 1), while green and blue are photon counts observed at two of THOR’s outer rings (Channel 5 and Channel 8+9+10, respectively). Therefore red means single or low order scattering, while blue indicates multiple high order scattering. The cirrus cloud and the very top of the Stratus cloud appear bright red due to an intense direct backscatter (though some thick parts of cirrus appear yellow because of some multiple scattering). The signal received at longer time-delays (displayed as if it had returned from lower altitudes) comes from outer parts of the halo, and so the red signal turns white at first, then green, and eventually blue. The abrupt changes in cloud altitude around 7.86 UTC and 7.98 UTC are caused by the aircraft tilting at turns.